Sometimes here in New England the summer seems to last forever-- it gets a little cooler but the grass stays green and the leaves on our Norway maples won't drop until the weather's about ready to spread that white stuff all over the ground. Just last week most of the leaves dropped and created what I call “golden snow”. 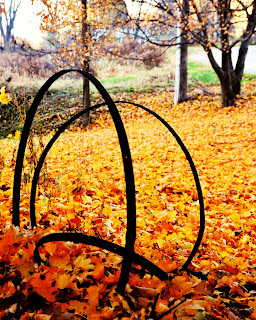 Hoopty Hoop by http://www.lyanavoteyphotography.com/
My photographer neighbor, Lyana, wanted to do a shot of me doing a “leaf angel” in the leaves but I would have had to rake them into a pile for that and they were just too pretty laying in an amber carpet so we settled on the above shot of my front yard. We Vermonters need to soak in all the color we can, for as long as we can, since Spring can be a long way off once the leaves are gone. I dug the flea market find-- below-- out of storage and hung it on my studio door. I think it's oil crayon on canvas. 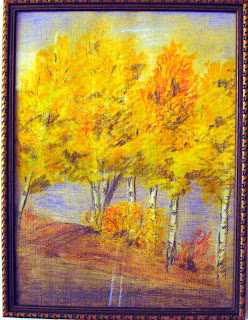 You don't have to be a Harry Potter afficianado to love owls. They have been depicted in petroglyphs since the dawn of humankind's ability to interpret our surroundings in drawings and carvings. Lately they've been showing up everywhere in my personal sphere. From the barred owl that calls from our back woods in the early evening dark to the huge Great Horned seen sitting on the wrist of Dowager Queen Eleanor of Aquitaine in the new movie version of Robin Hood, they represent the mysterious and untamed forces of nature. In some cultures they represent wisdom, in others a harbinger of death or illness.

I always associate owls with the deep woods, flying through a backdrop of towering dark hemlocks. They may be raptors like hawks and falcons and have been used by humans for hunting prey as well but they have a different vibe for me-- nothing cutesy or precious but more mystical and spiritual. Their gaze is not as intensely fierce as a hawk's. It has almost a zen quality, of just being there, waiting and listening.

So, bitten by the “owl bug”, I went in search of images that I could use to carve myself one, with the intention of making a mold so I could create several polymer clay copies for one of my cuff bracelets. While searching Etsy for inspiration, I came across several Victorian brass stampings with carving just spare and detailed enough to satisfy me so I figured why reinvent the wheel, I could use these as a jumping-off point for the cuff decorations.

I decided to lay down a textured background on my brass cuff blank so I wouldn't have to cover every inch and would get more decorative mileage out of it. I had one motif that combined the head and wings and when the clay copy ended up projecting a bit more from the flat surface, the effect was of the owl about to fly out of the background. I put two smaller owl faces at the wrists, a highly underrepresented area on most cuffs, in my opinion. I let the composition sit for a day, during which I decided it needed some woodland elements so I added some oversized acorn-y blossoms and some branches. It gave the cuff design a steampunk quality I like. Thanks to Jan for noticing that! After curing, layers of raw umber, a mix of greens and burgundy acrylics went on and were mostly wiped off. It was still missing another tone so I rubbed on tan shoe polish, which added just a bit of yellow tint and mellowed the red and green together. 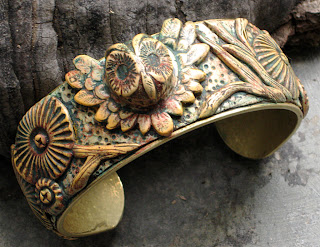 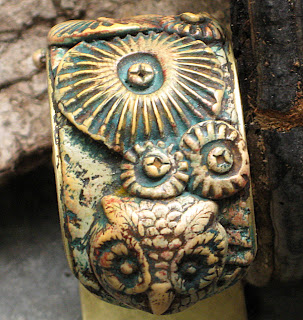 Wingéd - detail
I had some ivory base clay left over and an adjustable ring blank from Objects and Elements so I experimented with filling that with a little owl face. This is the first ring I've done and I opted for a lighter antiquing on it than on the cuff. 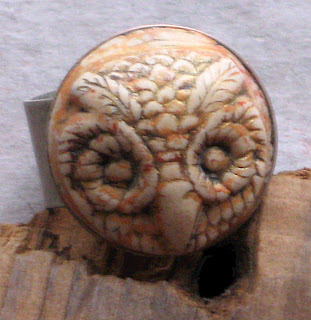 It's quite comfortable to wear so I'm encouraged to try another-- maybe resin? I've got some bottles of ICE resin calling to me. Next blog-- leaves. Is there a woodland theme here?
Posted by Stories They Tell at 7:12 PM