Things That Go Bump in the Night

Living on a farm as I do, something is always banging or squeaking or thumping in my house after my head hits the pillow at night. The field mice are rampant this year—maybe a result of  the long, hot summer?—and my cat would rather sleep off her supper than hunt. Little things chew in the walls—chipmunks frolic nocturnally  on the front porch—sometimes a bear comes to raid the birdfeeder. So I lay there—is it the wind? or something more sinister?

I’m pretty sure my sewing room is haunted. My sis came to visit last summer and claims she encountered a ghostly visitor who, though benign, was a shock to see upon waking in the middle of the night. But this is an old house—1830s—and there is much history here, of families who were born and lived and died here, had arguments and happinesses and conflicts and relationships and I’m just an interloper. I think the house tolerates me—cabinet doors don’t bang closed or things disappear, never to be found. But I love this old house and have always tried to take care of her and honor her construction and the ancient materials that form her bones. As the Celts hold the tradition of appeasing the Little Folk with a saucer of milk, so my Old House gets the best Ben Moore Paint and quality sheetrock from Home Depot. But sometimes I wonder.

For several years now I’ve made a piece especially for Halloween, which is actually the Celtic New Year, Samhain (saw-win) as a kind of jumpstart to the autumn season of indoor projects and freedom from garden and outdoor chores. Last year I made a small protector, a talisman against the Things That Go Bump in the Night. I call him the Little Man and he sits on the windowsill above my workbench where he can scare away bad things (or at least banish horrible artistic decisions). 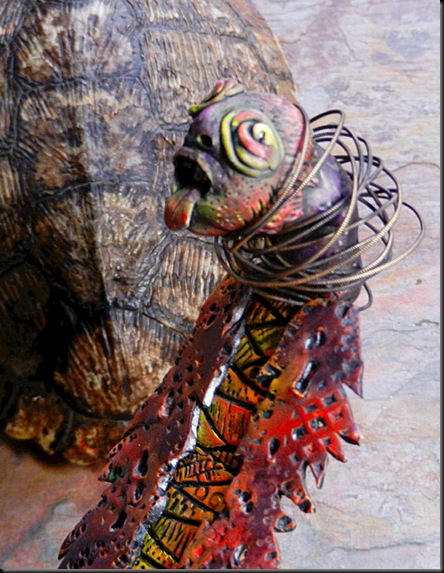 When my ongoing owl obsession kicked in a few months ago, prompted by a visit to see some of the real creatures up close and personal at the Vermont Raptor Center  I started a pair of owl earrings. As a base I used a Victorian metal stamping of an owl with wings outspread, added some metal leaf to white polymer clay and then finished off with acrylic paint and gilders wax. Keeping with the orange and black color scheme, I used some gorgeous agate drops and copper spacers, finished with a dangle of tektite. So they feel mystical and otherworldly at the same time, tektite being the by-product of a meteorite impact. 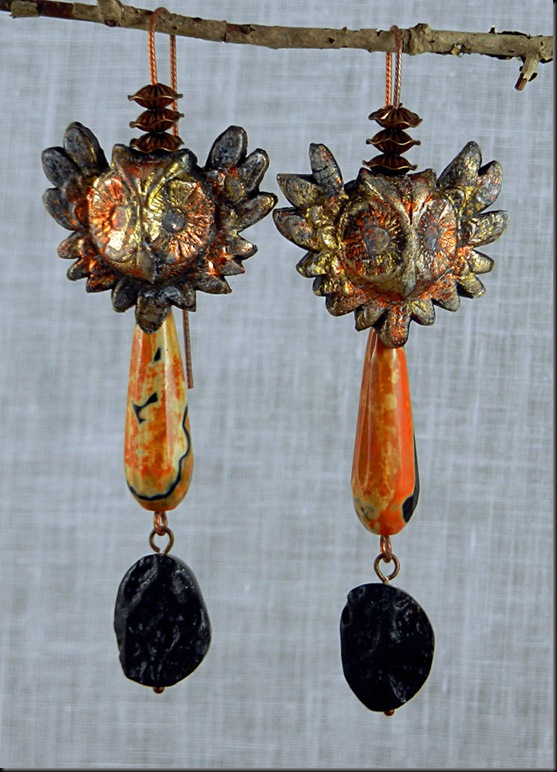 While my sister was entertaining nighttime spirits in my sewing room last summer, by day she and I were playing with resin for the first time. She had brought along some mask molds that she made during a workshop by the amazing performance artist Sha Sha Higby  and  I  made a couple up in polymer, since their faces were so compelling. I dug these out this week, added some Whimsy Wire connectors and strung them together with a shibuichi metal piece, some bone beads and a polymer pendant that I made a while ago. Sometimes things just have to sit around on my bench until they have  the right purpose.

“Things That Go Bump in the Night”

For this year’s Halloween-themed piece, I began my process with a wonderful strand of vintage mother of pearl buttons I unearthed at a local antiques mall. They were very tribal in feel and I knew they would anchor the entire piece. I wanted to diversify the traditional orange-and-black color scheme so I crafted a pendant made with a mold of a found object metal piece I purchased on Etsy. I purposely mixed the base ivory color with a smidge of brown and black for a gray that would mimic the patina on the original piece. I added some dzi beads in orange and black designs, some andalusite rounds and a few lustrous vintage faux amber lucite beads. It will be very wearable for any season and is a little Goth (at least for me) in feel. I call it “Tribal Victorian”. 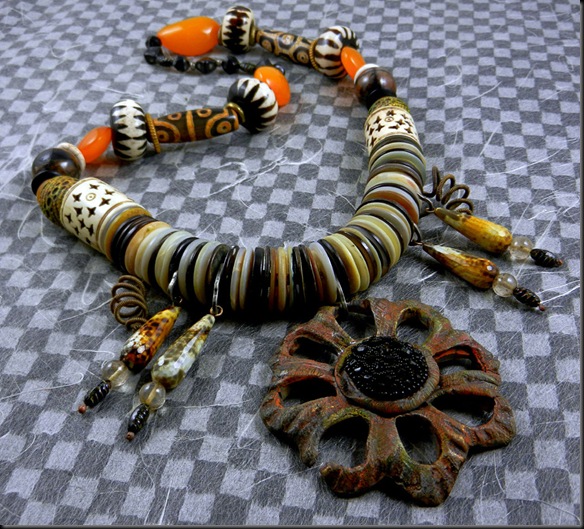 “Midnight in the Garden of Good and Evil” 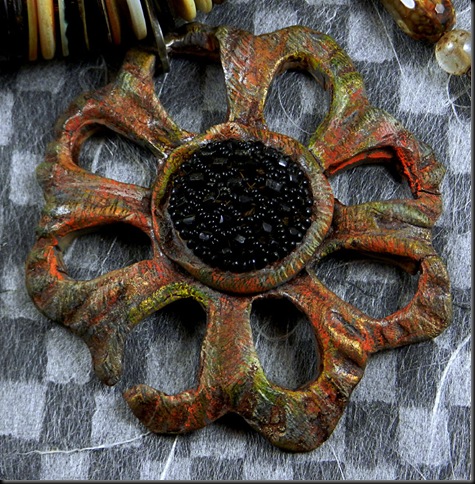 Please excuse the dark post. I’m feeling very affected by the destruction that the hurricane caused on our coast. Some close friends have still not been heard from. I hold good thoughts of them in my heart and mind and urge you to as well.

Posted by Stories They Tell at 1:54 PM 7 comments:

Teaching has to be the scariest and, at the same time, most exhilarating thing you can do as a human. You just have to fling yourself out there, be as authentic as possible and pray that your students are not only getting it but enjoying it. Bold is the way to go, no other way. What could be more terrifying than to look up at a ring of faces to see a look of total incomprehension on them all. But to look up and see everyone nodding and smiling-- ah, bliss! Soaring!

My three days at ArtBliss 2012 in Sterling, Virginia were a non-stop whirlwind-- meeting people, taking in all the creativity of the assembled students and teachers, connecting with friends both old and new, putting every ounce of energy into making sure my students were inspired, motivated and successful. Cindy Wimmer and Jeanette Blix made sure that nobody was bored or hungry or uninspired-- there was so much to do that I didn't get to enjoy simply because I needed to recharge every night so that I could make sure my students go their money's worth. They organized bead and charm swaps, coordinated author signings, provided great food and encouraged camaraderie.

Heartfelt thanks to all my fabulous students for conquering your fears about trying new things! Everyone seemed to trust themselves to delve deep into their creative wells and produced amazing work while supporting each other to expand and learn. What a nurturing environment!

As usual, I didn't get all the photos I wanted to but thanks to the camera skills of several students, including Carol Myers and Kathleen Klik, as well as those of Cindy and my husband Douglas, I think I managed to gather enough images to give you a hint of the level of mastery and imagination that were present in my classroom. I am a very lucky teacher! 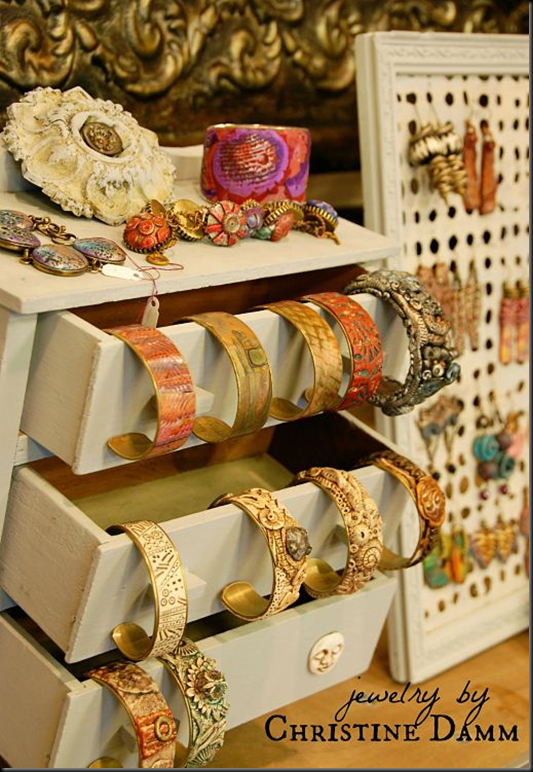 Photo taken by Cindy Wimmer of my Meet and Greet display 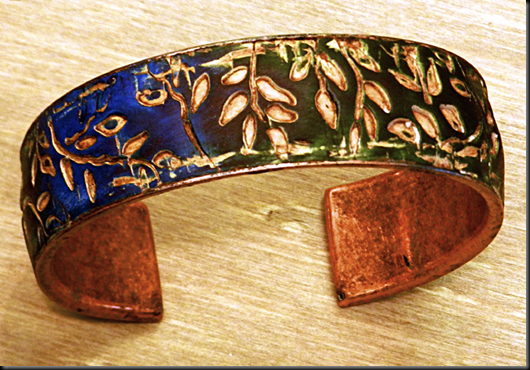 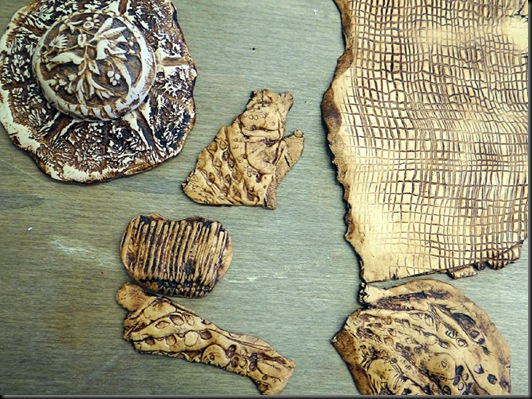 Some in-process shots, antiqued and ready to color 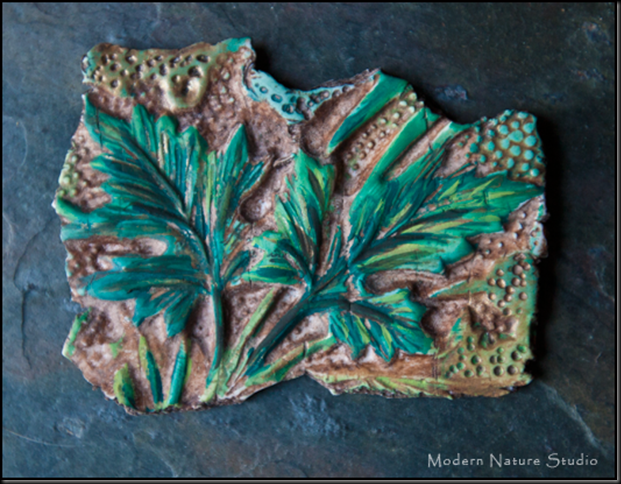 Kathleen’s photo of her leaf from Day 2, Color Your World 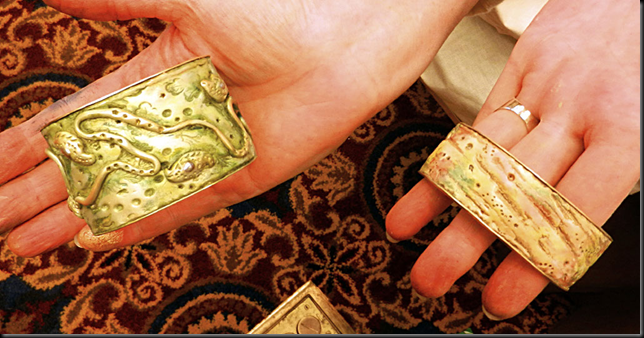 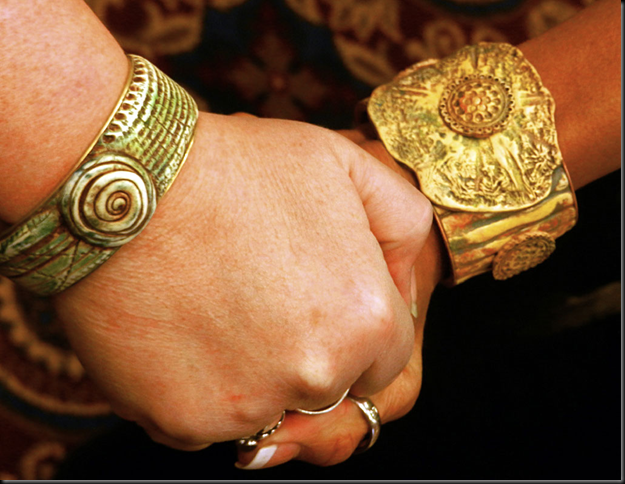 Cuffs by Jenny and Frankie 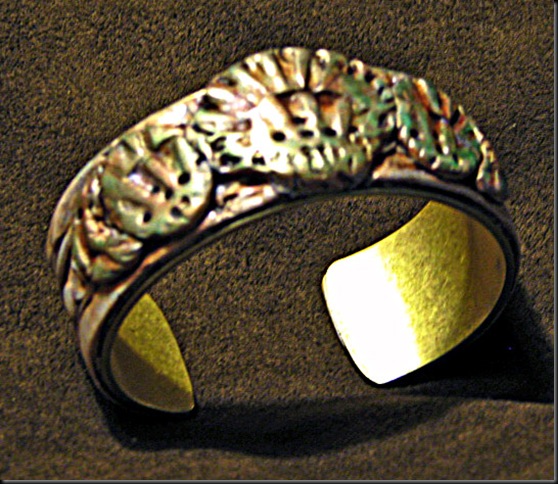 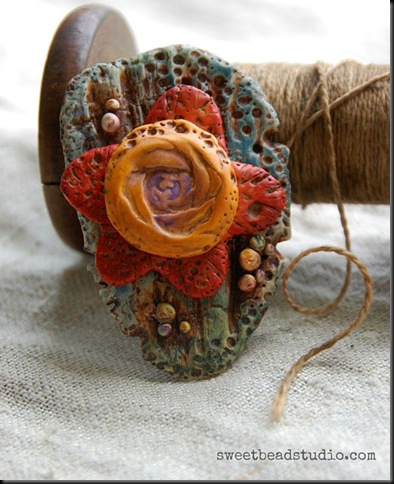 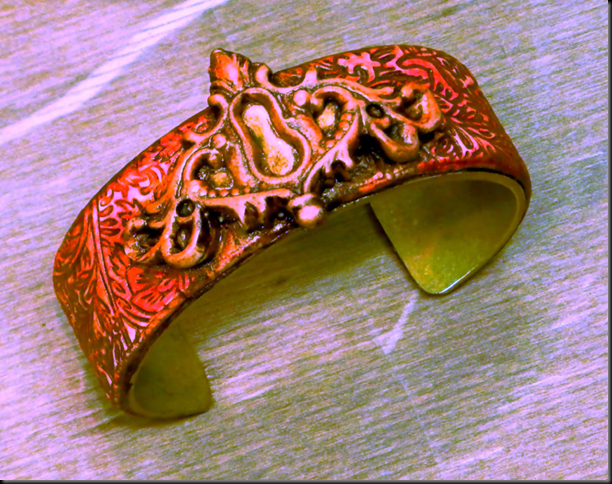 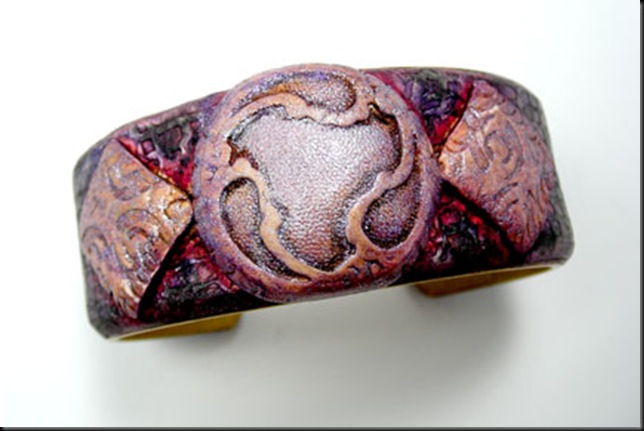 I’m already thinking of ideas for classes for next year! I’m going to continue with the idea of applying surface coloration to polymer since it seems that this resonates with people who have never used clay before but have experience in other jewelry-making and art disciplines or have worked with paints, paper and multi media. If you want to be notified of class topics for next year, convo me at www.storiestheytell.etsy.com. Hope you enjoyed the slideshow!