Color is My World - Part I

You know how it feels when you've been doing something you like so much and then suddenly a storm of commitments come up and you have to let the fun thing go for a while? You remember how good it feels to be able to do the fun thing again?

Well, that's what it was like to work on this month's Art Bead Scene challenge! I completed most of the Challenges in 2009 and then 2010 just shot by and I only got one finished and posted. I vowed that this year I would get back in the groove and do as many as I possibly could. By the end of 2009 I had a nice body of work that showcased my skills for any art jury that needed examples of my best efforts for shows and competitions. Although the challenges were time-consuming, I loved doing them. They stimulated my brain and developed my skills, both in creating art beads and in stringing them. Since I've become a serious, every-day-at-the-bench artist, I need to put myself in the way of design problems to solve-- they don't just show up in rural Vermont life.

So the gauntlet was absolutely thrown down when the painting to interpret was revealed to be one of the “Brown River” series by Wayne Thiebaud, a lively work depicting the Sacramento Delta in California, done in a primary-based palette of clear, saturated color blocks. I never work in these colors. I don't do modern.  Besides, doesn't Wayne Thiebaud do pop art pies and cupcakes? But I did ask to be challenged, didn't I?

I had gotten what I asked for-- in spades. The colors were challenging, the shapes were challenging. I wanted to use a new technique with oil paints and pencil but the beads I made weren't right for the application. I filled page after page of my sketchbook with ideas but it just wasn't coming together.

When I was in art classes in college, we would be assigned a design problem by our instructor and I would do what I called “throwing it into the 'creative soup'. I wouldn't think specifically about the problem for awhile; rather I would just go about my daily activities and wait for inspiration to strike. And it did, eventually. The lightbulb would suddenly go on as I shopped the art supply stores in Soho or listened to jazz or browsed some local galleries or even read a book. I found that activities unrelated to art frequently stimulated the brainstorm I was looking for.

In the course of an e-mail conversation with Barbara Lewis she recommended a new book from North Light Books by June Roman, "A String of Expression: Techniques for Transforming Art and Life into Jewelry". I ordered it and reading through the projects sparked inspiration for some quickly-made textured shapes that were slightly disintegrating. I envisioned these as pendants but couldn't make it work so I decided to string them in sequence. Next came textured clay coins that were colored with alcohol inks and liquid clay. I took some clay scraps in the painting's colors, chopped them together, and ran them through an extruder to make some mokume gane beads and headpins (it's a technique borrowed from Japanese metalworking). Twisted copper wire became the “brown river” and some larimar cubes completed the stringing. My husband suggested that the long length of wire work needed a color break and he was right so I wrapped half of the clasp in red silk.

When Thiebaud spoke at Harvard University School of Design in 1990, he responded to a student question: "What do you think defines an artist?" with "An artist creates his own world!” Amen. 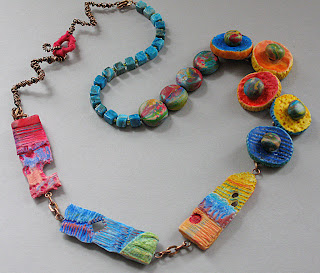 The past week has brought some serious meditations for me on the nature of inspiration-- what are the best ways to be inspired, the surest sources of inspiration, the very nature of the beast.

2009 was a banner year for me as far as inspiration. I followed the Art Bead Scene challenges closely and submitted 10 pieces-- almost one per month-- and created a body of work by the end of the year that got the attention of an editor at a prestigious jewelry magazine. Finally being published by Belle Armoire Jewelry in 2010 was a goal I could never previously have imagined attaining.

Commitment to Creativity #1: I'm going to keep the momentum going by doing as many of ABS's new monthly challenges in 2011 as I can. 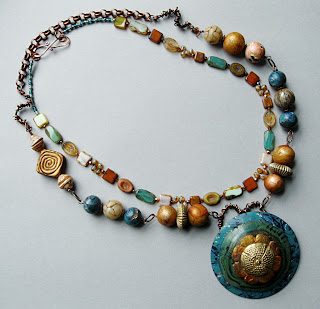 "Blossom" inspired by Van Gogh's "Almond Blossoms"
But more importantly, I was inspired to develop some new techniques and processses that I probably wouldn't have stumbled across left to my own devices. I really love doing my clay work so I don't need any push to sit down every day and spend most of my waking hours playing with the stuff or sketching new ideas. What I need is a focus for all this rampant energy-- therefore, a creative goal on a regular basis.
In 2010 I engaged-- and was engaged by--other artists in collaborations, something that gave me goals to achieve and new directions in which to travel. I very much enjoyed working with Claire Maunsell and Rebecca Watkins - Artybecca for a collaborative Hallowe'en necklace and we are currently engaged in another with an “outer space” theme. 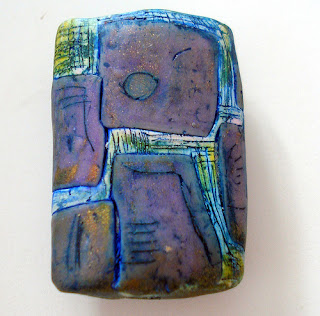 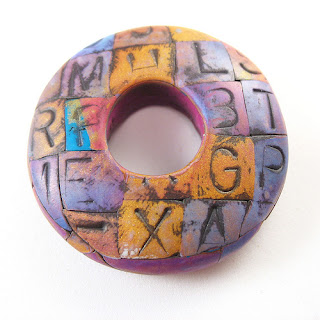 Bead by Artybecca
I was truly honored to be included in making beads this past summer for Erin Prais-Hintz's ambitious gallery show and used that opportunity to push the envelope quite a bit, inventing a new process for metal-effect beads that I have yet to fully explore. But sometimes I like to let new ideas simmer a bit, like a good stew that's better the second day. 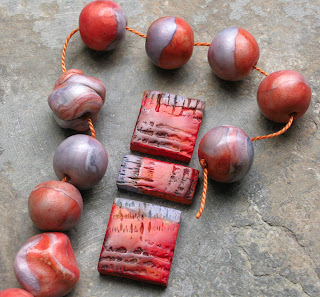 Beads by Stories They Tell for Erin Prais-Hintz's "Inspired By....." show
It seems to me that if you fully engage in your work, opportunities will crop up to play with others and goals will appear that will challenge you. So with a cornucopia of opportunities out there, why not choose the ones closest to your heart and passion?
Polymer Clay Daily recently posted about the RAD—Ring a Day-- challenge that ran for 2010, which had a fair number of polymer artists participating and while checking that Flickr site I found one that resonated for me—TADA, True Addicts of Daily Art. Their purpose is to “Commit to making progress every day of 2011 on your art jewelry creations. Show your daily steps forward with photos. Blog if you like. Goal is at the end of the year you will have at least one collection or series that is Show Ready”. I also like the tongue-in-cheek play on “tada!” I know that I personally love to see how people progress through their work, so I thought that maybe some of my readers might be interested in seeing how I do what I do. I can't commit to the everyday blogging part but getting feedback from you, my readers, will be immensely helpful to me since at some point I'm planning to write a book and need to know if there's clarity and inspiration in my explanations/instructions.

Commitment to Creativity #2: more blogging about process and sources of inspiration.

As you have come to expect, I will continue to pass on interesting insights into the nature of my creative process and provide enough eye-candy to keep you reading until the last line. 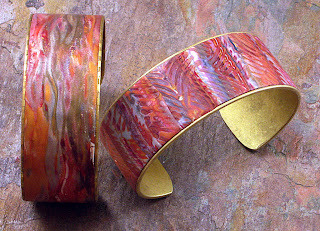 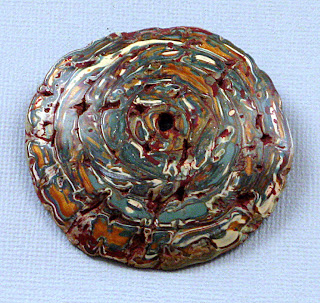 Montezuma pendant - confetti mokume gane
And here are my first efforts into the twisty-tangly world of cordmaking, courtesy of the Diva Cordmaker available from Fiber Goddess. 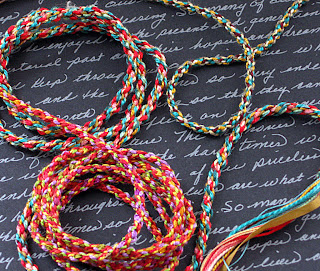 I'd love to hear what you have planned to jazz your creative juices for 2011. As far as I'm concerned, there can never be too much inspiration available in the world around us. And that's definitely something to celebrate in the New Year.