Re-inventing the wheel-- it's amusing that this phrase should have such a negative connotation in our society because, as artists, that's what we're constantly doing-- re-inventing, changing, deconstructing, enhancing, making it our own.

Just like adding a bit more salt to a recipe, or a tad more lemon or a teensy smidge more cayenne, tweaking what you started out with is the essence of an artist's creative voice. Why would you EVER want to do it like someone else?? We are unique and our work reflects that very uniqueness in every way that we express ourselves, be it painting, dance, playing an instrument, singing, poetry-- the entire range of human expression.

My favorite TV addiction for the summer is the show So You Think You Can Dance, where 20 super-talented young dancers compete for national glory and professional recognition. The range of dance styles is impressive and every individual has their own unique way of expressing joy in movement. A far cry from my sister's ballet school recitals-- a straggly line of little girls in sequined tutus all struggling to keep their steps in sync with each other to the scratchy music of an off-stage record player. Not a lot of room for dance interpretation there!

Nor do most occupations in our lives as working people support innovation, hence the phrase and its implication. So we should celebrate that in our art we have found a space in the world where all fetters to our self-expression are thrown to the wind! We should tell ourselves, "Today I'm going to re-invent the heck out of that wheel and I guarantee what I come up with is going to be all mine!"

Last week I showed you the beads I was working on for the Art Bead Scene June challenge, interpreting a Kandinsky watercolor. Sometimes making the beads is the easy part. Although I had a pretty well-formed idea for using them in the finished piece, I developed a flat and had to get out the tire iron, the jack and then call AAA in my re-invention of that particular wheel! But after road-testing it (excuse the excess of automobile metaphors) around my own neck, I decided to re-design it for better balance and composition and I'm liking the final result. 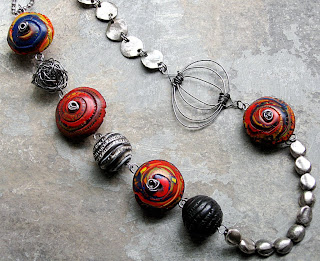 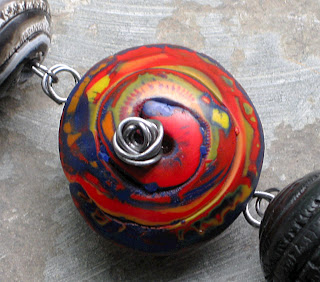 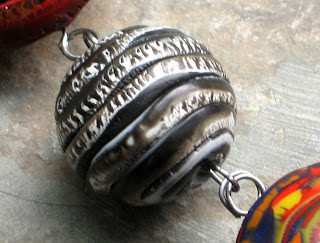 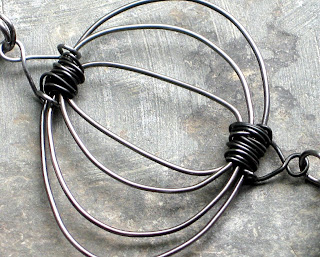 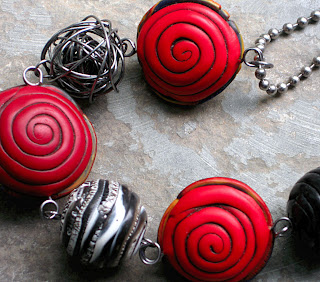 Someone whose work I greatly admire for its unique quality of invention is that of Gris Bleu, a French clayer. I never visit her site that I am not completely enlivened by her playful interpretation of color and form. Nodding over my first cup of coffee this morning at 5:00 am, I was inspired by her newest beads and thought of a better idea to make my next set of Kandinsky beads easier to string. I highly recommend perusing her blog as a way to jog you out of any creative rut you might be in. Lots to see here and it's especially instructive to look through her blog archives to see the progression of her ideas and work.
Posted by Stories They Tell at 11:14 AM 6 comments:

Color Is The Keyboard

Last week I referenced Michelle Ward's blog and her Challenge to MIYO -- “Make It Your Own”. There is just so much gold in her post that I decided to expand on some of her ideas today, making them my own, as it were.

It's June and the Art Bead Scene has posted another challenge to create a jewelry design using an art bead with a painting as the inspiration. I've been doing these Challenges since January and am amassing a nice body of work. I feel they are definitely more stimulating than anything I did in art school and I try to push myself by spending real quality time on the projects. This time it's Kandinsky's "Farbstudie Quadrate" (Color Study of Squares) and I'm doing a little research on the artist, his body of work and his artistic philosophy. 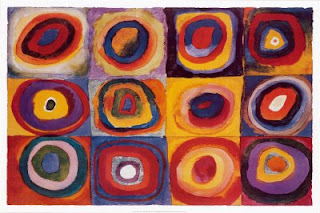 One of Michelle's points in her “Evolution of an Idea” is: Study -- figure out what it is that has gotten your attention? Color? Composition? Kandinsky, a Russian Expressionist and considered the first true abstract artist, went through several periods in his artistic life and I must say that I admire his 1911-1913 period the most for the ferocious energy of his brushstrokes and riot of colors. 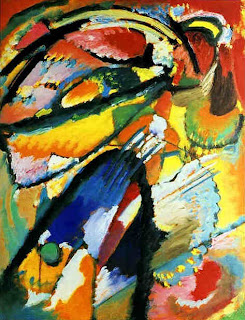 But the task is to interpret this painting and as I suggested in my previous post, limiting your materials or, in this case-- your inspiration to just one work out of the dozens by any artist that you could choose – will force you to really look and start to appreciate what the artist was trying to express in that particular piece. So what got my attention about this watercolor study was the energy that Kandinsky creates by making the circles imperfect. They are in nice, square little boxes but they are not round, symmetrical orbs, they are edgy, torn, and random in color, size, and design. For Kandinsky, subject matter was irrelevant-- he thought the effect of the object interferred with that of the color, reducing its impact. Now I love circles but disintegrating circles are even better!

So for this project I decided to go with the idea of the deconstructed colored circles. I've explored the crackle technique I learned from the French blog Parole de Pate quite a bit in my work -- it's a technique that delivers color in an unpredictable way that I like. As with the mokume gane technique that's my favorite, you never know exactly what you'll get. It's like dancing with chance, an opportunity to break the bonds of technical perfection that too often become an end in themselves for polymer clay artists. 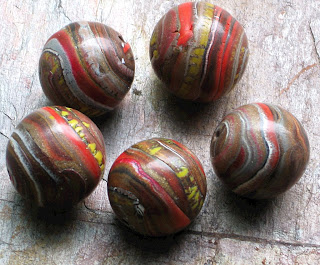 "Out of Africa" beads - in my Etsy shop 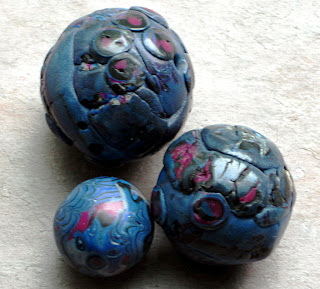 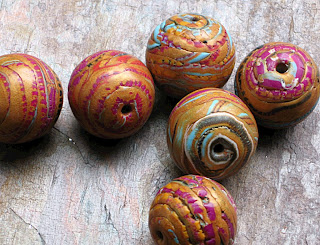 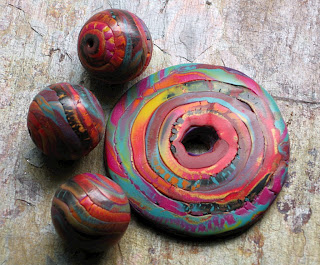 My spin--how I make it my own--for the crackle technique is to consistently reproduce the crackle effect with the colors I want, rather than simply using leftover canes and dried-out clay of random colors. I also make donuts with it, little cosmic rings of color. This is what I decided to go for with the Kandinsky circles. I think they ended up looking a bit like enamel work-- didn't expect that! Once I get the rest of these sanded and buffed, the necklace design is the next challenge! 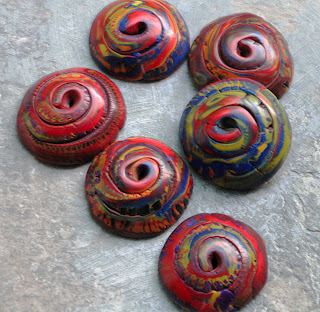 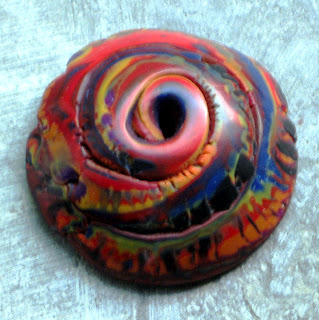 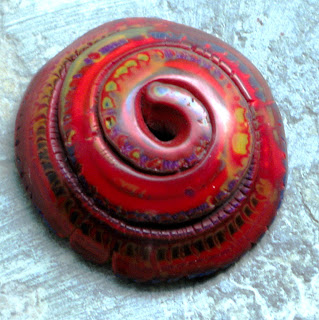 My scholarly source says that Kandinsky was not only a painter but an art theorist, and believed that color, stripped of its associations [with form] communicated something essential about the underlying laws of the Universe. He said, "Color is the keyboard, the eyes are the hammer, the soul is the piano with the strings."
Posted by Stories They Tell at 5:58 PM 3 comments:

Necessity is a Mother

As an artist, I should celebrate that all my life I've had to make-do with whatever I had on hand as far as the art supplies and materials necessary to create. Invention is usually driven by necessity or the need to solve a problem. And the ability to problem-solve is possibly the greatest force for creativity in the artist's toolbox.

For instance, you don't have that really cool tie-dyed silk ribbon you saw on Etsy to string your pendant? So you rummage through your stash of fabric scraps, tear yourself a strip and dip-dye it with some alcohol inks from your clay supplies, make some interesting wire- and yarn-wraps around it and finish it off with a handforged silver charm or two. Voila! It's not only more creative but it's totally your own. 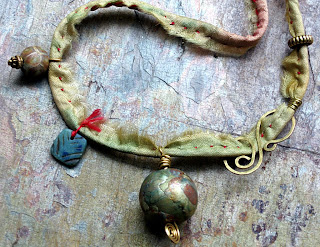 After reading a great blog post this week from Michelle Ward http://michelleward.typepad.com/how_cool_is_that/ on MIYO - “making it your own”, I realized that solving an artistic “problem” by limiting/re-thinking your resources is one of the best ways to do this. How many times have you polymer clay artists out there come up with an incredible effect after re-purposing some kitchen item you've scavenged as a texture tool? Or used to make a mold that you'll never see in an online store? 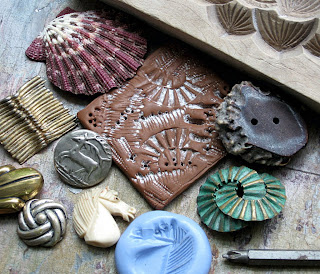 For me, this is the lure of the found object-- it's often cheap, it can change its personality to suit your needs, it has history, it's unusual and one-of-a-kind. What other art material can offer so much? I NEVER refer to found objects as junk or junque-- they're valid materials as much as oil paint or silk cord or silver beads. 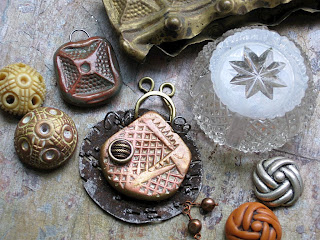 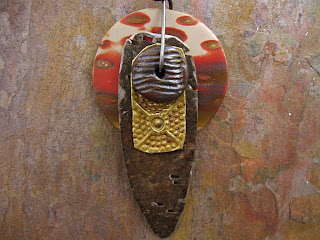