Humankind has always sought ways to copy the stones that they mine using imitative techniques. When I was at college in a pottery program, jade and its many shades were achieved on porcelain and stoneware by the amount of iron oxide added to a glaze. Chinese potters discovered that at low amounts, shades of light jade called celadon were created, all the way to the darkest black/brown at maximum saturation called temokku by the Japanese, who borrowed the technique.

My jade adventures started when I was playing around with some translucent clay colored with a tiny amount of opaque color and started twining it around and around, ending up with a bead that to me looked like carved stone. After sanding, antiquing, baking to set the oil paint, sanding again and polishing, I liked the effect enough to try other colors and combined my experiments into a necklace with some of the ancient metal effects I showed you in an earlier post. 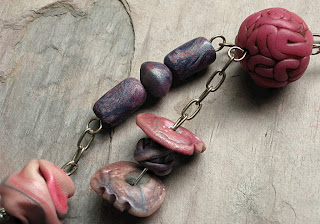 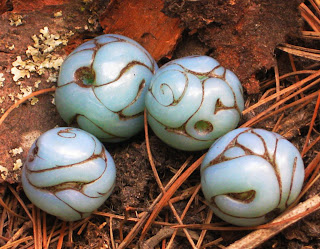 I was in the process of making some ivory beads in this carved stone technique to go with a project, and I found myself dabbling in faux jade. I love jade-- in all its many colors-- and started collecting magazine photos of it when I became interested in polymer clay so I could have examples of color variations and ways that the natural stone was used. Almost every book on polymer clay that you pick up has its own recipe for jade-- I used Carol Blackburn's from her book Making Polymer Clay Beads. 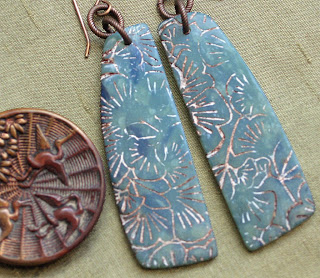 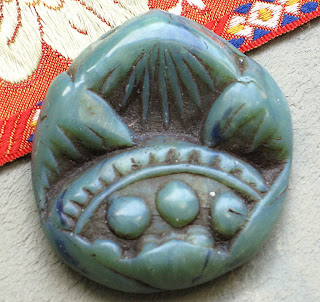 As you can see from these photos, I like making faux stone donuts! I find them very useful as connectors in bracelets and necklaces and there's some interesting tension between the round outside shape and the square interior shape, like Chinese coins. In this shot I included some carved-look colored beads that I made from leftover clay from a colorway I was using for some other beads. 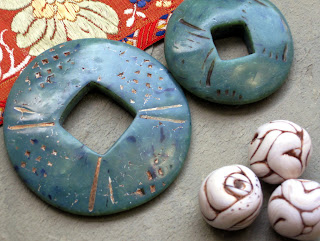 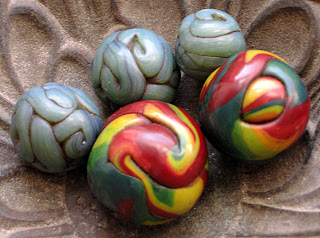 After getting myself re-acquainted with my Dremel buffing attachment, ( I hate power tools!) I went on a buffing frenzy! I like my beads to have a soft sheen and usually don't power-buff them. But the colors and textures of this imitative stone really seem to pop with the additional buffing. Below is a piece made from a Japanese wooden mold I scored on Ebay-- it's ???--polymer clay in a big wad of marbled leftover clays that I used to test the mold. It sat in the back of my bench drawer for about a year when I found it and decided to use some rub-on metallic finish on it. With the addition of an etched bezel and a chain, I think it will make an interesting pendant. 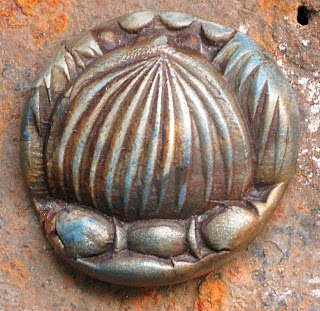 As I was finishing up my morning photo shoot, it occurred to me that I had some beads that would look great with all this faux jade and ivory. Here's what I might put together later. 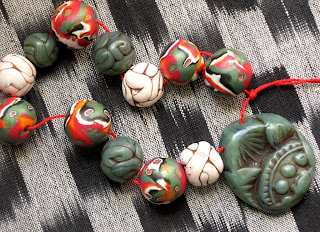 Posted by Stories They Tell at 9:27 AM