Dragons abound in literature from the earliest written records and leads us to wonder—if they appear in the folklore of so many diverse cultures, might they really exist? I suppose I was bitten by the dragon bug when I first read The Hobbit back in college many years ago. Smaug was the product of the awesome imagination of J.R.R. Tolkien —and what a magnificently-fearsome dragon he was. Jewel-encrusted breast, lying on a priceless hoard of dwarves’ precious gold, prone to livestock-and-villager-hunting rage on any given day—he remains one of the great creations of imagination in all literature.

When designer Andrew Thornton proposed a new jewelry challenge, Inspired by Reading,  based on a monthly book to be read by the members, I knew I couldn’t resist. After just a few paragraphs of May’s selection, A Rumor of Gems by Ellen Steiber,  I was hooked. Ms. Steiber creates an amazingly realistic world in the city of Arcata and her characters are nicely flawed and endlessly fascinating. Her prose is beautifully poetic as well.  But despite the precious gems that continue to turn up in every alley of the city’s streets, the scene is constantly being stolen by a small jade dragon that goes from an inanimate statue to a vibrantly alive creature in the blink of – well, a dragon’s eye. From the moment I began to read, I knew I wanted a dragon to star  in my jewelry piece.

Over the past year I’ve bought a few dragon-themed books to use as inspiration for a dragon pendant or sculpture since I like scary and scaly dragons, the real fire-breathing type. Like the medieval ones in The Book of Kells, kind of fantastical (are there really any other kind?) and mysterious. I had a design that I used for the body of a snake in my “Serpent” necklace so I recycled it with the addition of head, feet and wings for my pendant, using attachments for a bit of 3-D and a faux jade mix of polymer clay for the body. 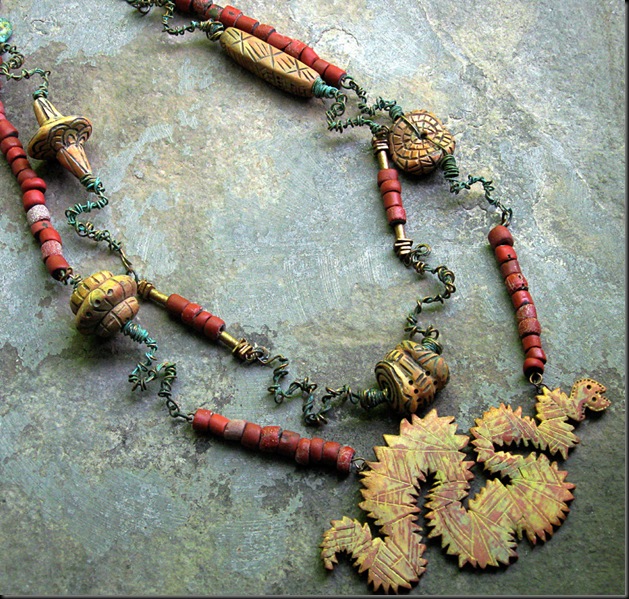 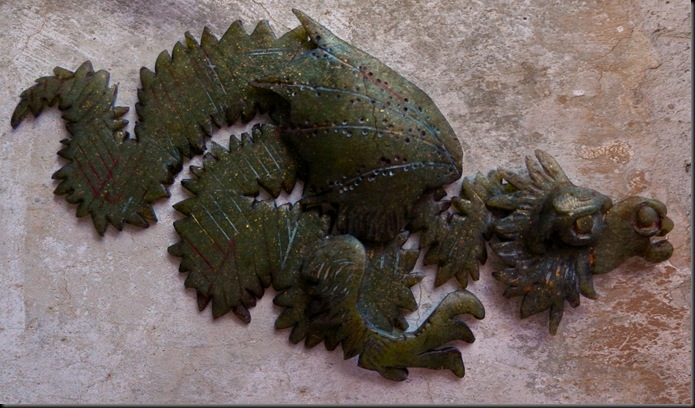 “Wyrm” – Polymer clay, heat-set oil paint, acrylics
But all the extra body parts made him too big for my intended necklace. I dug out some faux jade beads that had been sitting around and liked the technique that created them so I used the extra jade polymer mix to craft a pendant in the same style and some heavily textured dangles for it. Then I remembered a brass dragon stamping that I had purchased from my favorite Vermont Etsy seller, You Are Not the Boss of Me. Mounted on the front of the pendant I think he looks right at home. I added some honey tourmaline, African brass rounds, a handmade wire-wrapped copper bail and some copper chain and it was complete. I could definitely see the main character, Lucinda, wearing it. 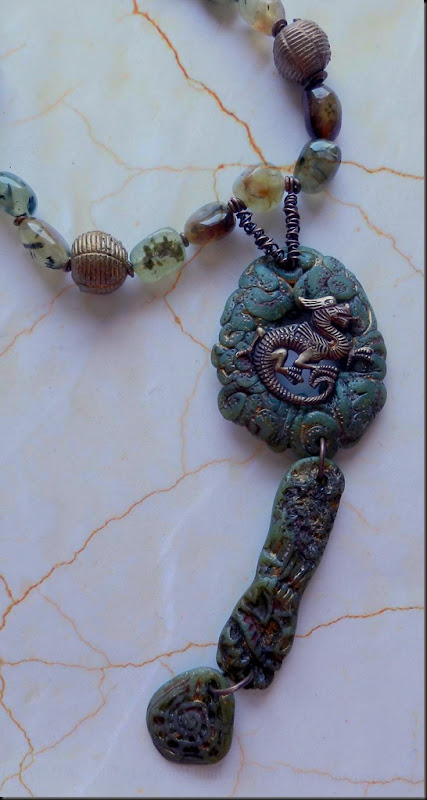 I highly recommend this book. And if, by the end of it, you haven’t quite had your fill of dragons and gems—the author is in the process of writing a sequel to Rumor of Gems. If you love to make jewelry and you love to read, check out the Inspired by Reading Book Club on Andrew’s blog,
Posted by Stories They Tell at 1:49 PM