If you were on high ground in Vermont two weeks ago watching as Tropical Storm Irene sent sheets of rain down for twelve hours, except for a fairly warm drenching there wasn't much happening. All the battening down of lawn furniture and picnic table umbrellas proved unnecessary since the predicted Category 2 winds never developed. Of course the power went out about four hours into the storm for four days but we were prepared for that. We had water, oil lamps, crank-up radios, food and plenty to read as we hunkered down in our one-story workshop situated in our field and out of the way of tall trees. 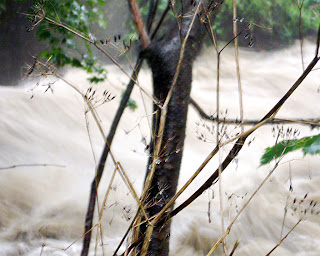 The stream next to our house 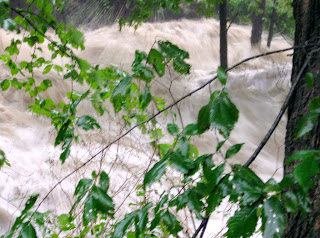 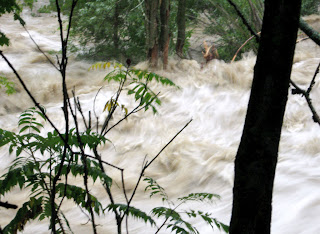 Overruning the opposite bank
As the rainfall rate started to crank up, my husband and I went outside to get a better view of the teensy stream that runs at the back of our acreage, which was cresting its banks with leaping waves and had begun to flood the lower parts of the property. Happily, it had avoided our newly-planted apple grove and blueberry bushes. A wide, shallow river of muddy water was rushing toward a confluence with the larger stream whose course runs a few feet from our driveway, flowing from the hills across the road, under a small bridge and down to the Third Branch of the White River. When I bought this house in 1994, I made sure it wasn't in a flood plain but I also guessed that once the water flowed under the little bridge it had a wider place to go and therefore wouldn't rise to the top of our bank, 12 feet or so above the streambed. My gamble was correct and although Douglas snapped photos of the water's crest coming to within a foot or so of the roadbed of the bridge, severe damage was avoided except for a total rearrangement of the stream's course as well as some physical features of the landscape downstream. I also knew that our home, which is post-and-beam construction and built in 1830, had withstood the historic Vermont Flood of 1927. It had, in fact, sheltered men from the community who stayed here overnight so they could keep one bridge open off Braintree Hill by fending off large trees that were washing down the streambeds and threatening to demolish the bridge. 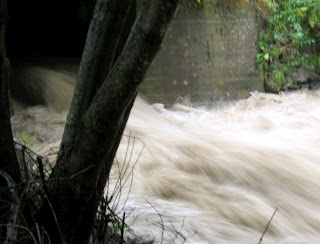 Floodwaters flowing under our bridge
﻿
We had experienced major flooding from a summer storm in 1998 and lots of roads in our nearest town, Randolph, were severely damaged that year. Earlier this spring, major work was done to replace aging culverts and this work was well-justified, as those previously-damaged areas came through with flying colors. The Amtrak trestles didn't do so well. In two sites the track was seen suspended in mid-air with nothing underneath for 20 feet. 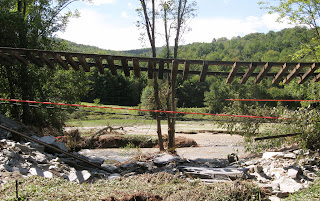 Amtrak "suspension" bridge a mile from our home
Monday after the storm we ventured into town to get a cell-phone signal so we could call relatives and let them know we were ok. We began to see saturated furniture and household goods piled in front of homes and farms. Boulders and large trees were left in the middle of flattened hayfields, like strange sculptural installations. Stands of ripe corn were covered with gray mud. Parking lots had collapsed into streambeds, giant bites taken out of the asphalt. Stores had their doors open but without lights. We checked our local Aubuchon's Hardware and they told us generators were on the way. Shaw's Supermarket was running on generators but the shelves were still reasonably stocked. Randolph Village, which had been so hard hit in the Flood of '27, had survived the worst. At least our floodwaters had receded. 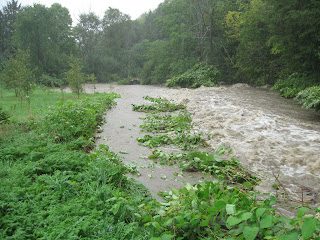 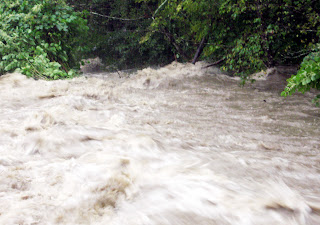 Battles Brook heading toward its meeting with Flint Brook

But many of our tiny villages and communities are still isolated and without power or a way to get out except by foot almost two weeks later. My husband's company had watermarks 5 feet up and mud all over their offices and manufacturing facilities. They will rebuild but it will take months and lots of physical labor and help from a backhoe. It's hard to believe that in 2011 our civilized world could be dealt such a blow from the forces of wind and water. You read about the tornados and the earthquakes and the tsunami but until the water's at your door, it doesn't seem real. We are lucky in Vermont that we still have some time to fix roads and find shelter for those whose homes were demolished before winter and the inevitable cold arrives. But the courage and fortitude (a word hardly used anymore) of my neighbors in dealing with this crisis makes me proud to be part of this community-- we're not whining, we're not looting, we are being generous with our resources and our homes, we are rebuilding by using our own hard work and hands, we are helping each other. In earlier times we did the same. It seems adversity serves to renew our trust in each other and our interdependence as a community. 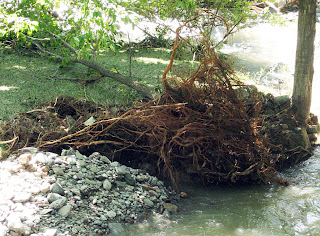 Posted by Stories They Tell at 4:44 PM